30 Songs to Reach for When You Fall, This One's for Guy Clark 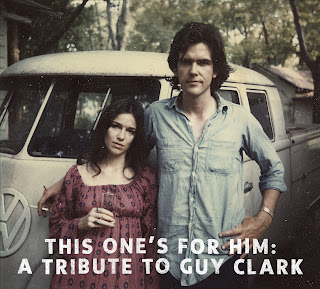 Guy Clark's 2009 song "Hemingway's Whiskey" gives this tribute to the great Texas songwriter its title, This One's For Him.  Kris Kristofferson's performance of the song serves as a fitting centerpiece.  For one thing it speaks to aesthetics that tie Hemingway, Kristofferson and Clark together--"warm, smooth and mean/Even when it burns, it will always finish clean."  And as much emphasis as writers like to place on Clark's (or Hemingway's) conciseness of language, it's worth noting what makes this piece so beautiful has as much to do with the performance as the words themselves.

Kristofferson reads that line biting down on the word "mean," wincing at "burns" and tapering away on "clean."  Spurred on by Shawn Camp's dancing and sparkling mandolin, Kristofferson tenderly sings here, allowing his voice to crack for the reach on the words "sail away," soothing and being soothed by the melody. Verlon Thompson's guitar and Mike Bub's bass take one deliberate step forward at a time, while Kenny Malone's snare throbs like a racing pulse.  (Liner notes claim Jen Gunderman plays piano, as she plays some instrument on virtually everything here, but the fact that the piano is all but undetectable testifies to the subtle interconnectedness of the musicianship throughout.) As is true more often than not over the course of these 30 covers by over 30 different songwriters, the tension of this performance is so palpable it evokes simultaneous and contradictory physical reactions, a gut punch in a kiss.

For this listener, the highlight of this record is its music. It's in the way Patty Griffin's voice climbs up on that roof with the little boy in "The Cape" and it's in the way she soars through the refrain's "leap of faith."  It's in the way Lyle Lovett finds a way to dance through the pain alongside Griffin and Shawn Camp on "Anyhow, I Love You," aided immeasurably by Matt Rollings' gorgeous piano. And it's in the way Steve Earle spits out the "smell of the black powder smoke" in "The Last Gunfighter Ballad."

The beauty's also in tough guy James McMurtry sailing away on that "Cold Dog Soup" chorus and in John Townes Van Zandt II singing that wino back home with the final refrain, "Let him roar/Let him roll" and the way that three note progression on his guitar has set this moment up throughout the long story that comes before.  Everything here works, on some level, and Rosie Flores's sauciness suits "Baby Took a Limo to Memphis" just as Suzy Boguss's delicacy caresses each moment of "Instant Coffee Blues."  Ray Wylie Hubbard, on "Homegrown Tomatoes," and Gary Nicholson, Darrell Scott and Tim O'Brien, on "Texas Cookin,'" make straight-up party records out of the joys of good eating (Hubbard's "what'd life be without homegrown tomatas," resonating as one of life's great hunger-inducing questions).


Particularly unforgettable is the way Kevin Welch inhabits the character in Guy Clark's 2006 song, "Magdalene." His voice sounds both ragged and world weary, so "ti-erd" he's inches from not getting that word out.  But this is a song about a choice to live, and that voice rallies.  By the second time he invites that girl to join him on the "Greyhound leaving at midnight," you're not only betting on him to win, you're wanting to join him in the fight.

In the end, it's this life-affirming vision in the face of abject loss and loneliness that makes this album, and Guy Clark's music, so special.  On a record filled with radio-ready singles, the two that cry out most
strongly for contemporary country play are probably Willie Nelson's "Desperadoes Waiting for a Train" and Shawn Camp's "Homeless."  Giving epic scope to the poignant grandeur inherent in this story of a young man and a father figure whom the world has passed by, Nelson seems born to sing "Desperadoes."  Camp's full-bodied vocal points up the gorgeous resonance of one of the finest melodies here, digging in close to the meanest aspects of American life and insisting on compassion.

But my favorite moment may well be Rodney Crowell's exquisite opening cover of one of the oldest songs here, 1971's "That Old Time Feeling."  Crowell feels his way through this waltz of puzzle pieces in search of other missing pieces--connecting desultory salesmen and guitar pickers and soldiers walking on crutches with that final image of an old lover who "rocks and spits and cries" thinking of "the girl with the clear blue eyes." As the song builds, Crowell's voice cries out for the right words, drawing close and quiet as each image takes shape. In a landscape of loneliness, pain and loss of direction, that voice--both lyrically and in this performance--is all about love.  That's the record in a nutshell. 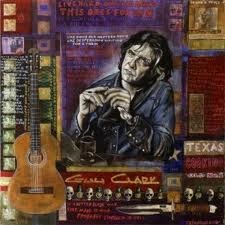 Posted by Danny Alexander at 9:07 AM