"Let's Look This In The Eye," Me Like Bees Sing the "Naked Trees" of Joplin 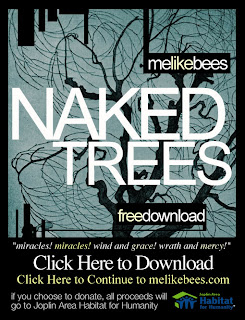 It's startling really, but kind.  Luke Sheafer's lilting "Hey, we'll inch out all these miles," emerges from the speakers over two light taps of glockenspiel.  A gentle, alternating guitar chord pattern follows, along with two more chime-like taps.  Me Like Bees' new single (all funds going to the hometown habitat for humanity) begins like the hand of an old friend on the shoulder, side by side with the listener at the scene of the devastation.

The bass and drums kick in as the singer recalls where he was when it all happened, out of town, helping a dying friend. The Joplin tornado's destruction is all over the news, and he can't get through on the phone. As if responding to this frustration, Pete Burton's guitar pushes the music to its first crescendo.  The story swings from a personal loss to another order of loss altogether, something near incomprehensible.

Now the music returns to the beginning, but the guitar is biting as "the sky opened its mouth and showed its teeth."  Friends are buried under homes.  And "everyone was screaming..." this wordless refrain.  By the time the refrain is repeated, it's introduced, "everyone sang."  Out of chaos, voices find harmonies.

That doesn't mean it's easy.  The song moves to the post traumatic effects.  "So, now you can't sleep when you hear rain," the singer acknowledges.  Shimmering guitar chords almost soothe, but the band explodes into an agonized bridge.  The singer gnashes and bites.  Band members shout back.  The music is about to run off the rails...

It doesn't though.  The wall of noise falls, revealing that first verse pattern.  Whistles respond to the singer's calls--insist on the melody, push forward with harmony.  The guitar rares forward with a funky percussive riff.  The lyrics still acknowledging that, "your mind keeps bracing for that howl again," the music soldiers on.

The song ends back with that friends' hand on the shoulder.  And in this lilting tenor, he's telling you that, despite the devastation in every direction, there's got to be meaning in the fact that some trees are "greening again."

The song's over, with a final quick pulse from everyone in the band.

When Me Like Bees first released this single, I immediately felt this song as a delicate, considered rendering of pain.  Grief was the word that came to mind that night; still does.  This is a song by, for and about friends facing the ravages of the Joplin tornado.  It's thoughtful about the dangers dealing with a pathos so deep, and it's equally fearless in facing them down. Loss like this can't be avoided, talked over or around, or minimized.  It also can't be dealt with impatiently.  Though the ending focuses on a small sign that life itself refuses to give up, such hope is offered only as what it is, an observation.  The song's smart enough to end without editorializing further.

I know few things as well as this one--if there's one thing we can count on in life, it's pain.  Friends stand shoulder to shoulder with us through our pain, knowing they can't take it away.  The song's repeated advice, "Hey, let's look this in the eye" seems about as good as it gets.  Music this naked, brave and beautiful makes it something close to bearable.

Me Like Bees single, "Naked Trees," is available at www.melikebees.com  You can name your price, and the money goes to Joplin Area Habitat for Humanity.

Postscript:  Me Like Bees' December 3rd Riot Room show delivered almost all new material engaging, thankfully, a decent-sized house and near-full floor.  "Naked Trees" offered a particularly delicate beauty in a set that ended with a bit of destruction no one in the house is likely to forget.  At that show, I also learned what I took to be a wordless refrain actually had meaning central to a metaphor I missed altogether.  To promote the fundraising single, the band distributes postcards with the band's web address as well as lyrics far more clever than suggested above.  I decided to leave my mistakes above intact; they're the honest reactions of a listener. And music is music, first and foremost, an auditory experience.  (In addition, the record deviates in at least one meaningful way from the lyric sheets that I'm glad I caught.)  Still, the lyrics add rich layers to the song, so I thought I'd share the right stuff in the same space.  They read--

Hey, we'll inch out all these miles
All our friends' houses in piles
Either side they're forming aisles
We'll breathe those fallen walls in till we choke
Amongst the naked trees we'll bear the yoke.

I was north helping an old friend park his tired soul
And while a song to help his belle along was due
My town down south cut in with its own tune
But I couldn't make it out, those phones were dead
That didn't stop the whole world from feeling it.

Hey, let's look this in the eye
Fear causes only divide
Don't feel guilt for troubled skies
For by the hair of our collective chin
Lord know it wasn't we who let it in

De nulle part le Loup souffla et le Loup souffle!
Miracles! Miracles! Wind and grace, wrath and mercy!
Heroes and suitors, villains and looters sifted out in the scrum!
But it's not done
It's still at home on every tongue

Hey, let's look this in the eye
Cease this mind-wrapping of why
Don't feel guilt for troubled skies
I know it seems for miles the world's at end
But even in all this are naked trees greening again.


Posted by Danny Alexander at 2:13 PM