Fingersnaps, Real Love and No Drama 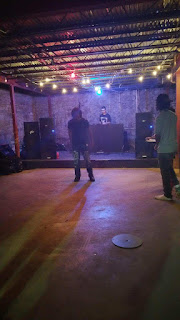 When the young poets and artists at my Chicago book talk finger-snapped in response to something I had to say about Mary J. Blige's vision, I thought it was some idiosyncratic holdover from the beatnik coffee shop (the bookstore was part coffee shop after all). When I heard everyone doing it at the underground hip hop/poetry slam later that evening, I realized it was bigger than that. When I was speaking to a group of middle school students in Memphis, and they started doing it, I realized I was really out of touch.

That was meaningful, because the two visits (each with multiple "events") had been pretty different.

Talking in Chicago, I was thrilled to have a journalist ask me what I learned about Blige's process. That got to the heart of what I'd hoped to achieve from the beginning--to describe this artist as an artist, rather than the way pop culture figures, particularly women, are more often described--as Superwomen, as Horatio Alger stories or as fodder for gossip. Though the one reason I would have liked to have had access to Blige would be to get deeper into that answer, my research and my interviews yielded a number of answers, most notably that Blige is a generous collaborationist, especially as she's grown, humble enough to consistently embrace the scariest challenges as opportunities. Of all the interviews I read or collected, nothing showed that trait more clearly than the story told by the Higgens sisters songwriting team, who described how struck they were by Blige's openness, thoughtfulness and conscientiousness. (Give or take my couple hundred page essay, it's those varied testimonials that make me hope Blige does read the book.) 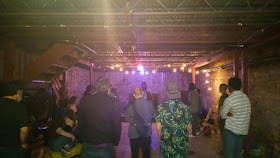 A theme that stood out in Chicago was just how important it is that Blige found a way to escape the trap of being a tragic blues figure, Blige's focus since about September 11, 2001. And this theme fed directly into one of Chicago's central questions. When the industry itself has become a tragic shadow of itself, what is the fan's responsibility to answer the call of the music, the call for community. Afterward, at a beautiful underground event called TheRAPy 101--part three rap features, part discussion of style and philosophy, part open poetry reading and hip hop jam--it hit me that the whole of the evening was helping me to better understand the title of my book, Real Love, No Drama. All of us in the room were chasing and grasping a real world concept of love, all of us shielded for those few hours from the drama outside (57 shootings that weekend in the city), all of us recharging to go back out into the world.

The students at Memphis's Soulsville Charter School deepened that meaning. I talked to a Stax Music Academy group and then a work-oriented Mployee summer program, over a hundred students total, and they schooled me in all kinds of ways. We watched the "No More Drama" video together (a video that came out before some of them were born), and they told me (alongside great input by their teachers) how that music and that video carried forward both the traditions of hip hop and soul. First, they described those forms of music in non-musical terms--as ways of knowing who you are and ways of living in the world around you. Of course they could also tell me the technical elements--the montage of sounds,  the gospel in the vocals and the overall build of the song--but they told me so much more than all that. They saw the way Blige used the video to highlight the connections between Blacks and whites and Latinos, and they recognized the way that connection extended to the call for an end of war. When we made those connections, that was when the fingers started snapping. 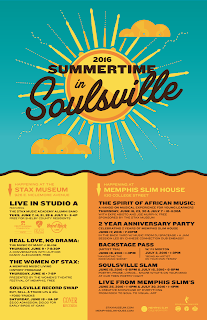 The students were very open about how they connected to the ideas in the song. I have to thank instructor Harry Cash for being every bit the hype man we all needed. He asked the students to raise their hands if they knew drama in their friendships, and in their family lives, and in their school. At each call, the room would explode with hands in the air. (Eddie Floyd couldn't have got more hands in the air.) In the Mployees group, it was heartbreaking when Cash asked the packed room how many of the kids had lost friends to the drama in the streets--virtually every hand went up.

But even more importantly, some soft spoken young men and women went to great pains to define just what drama meant and how it tied all of these struggles (in the world and in their lives) together. They explained that "no more drama" meant not to let your emotions get the best of you, to not just react to what's going on but find a way to reflect on the situation and strategize a way to solve these problems. One young woman in the back of the room told us she heard her own voice in Mary's. She heard the pain she felt; she heard the loss of two dear friends. To this young woman, the call for "no more drama" was "what it means to live as a young Black woman in this world."

That hit me hard because it so clearly echoed something a woman named Alexis Baptist said to me during an interview with Atlanta's WRFG (for a show called Class Chronicles). Some backstory... When I learned Ms. Baptist was going to interview me, I was more than a little starstruck. We didn't know each other, but I'd known who she was since about 1990 when I first saw her in a film called Takeover, about homeless people organizing in different parts of the country. A teenager perhaps a couple of years younger than Blige at the time, Baptist had been one of the most eloquent spokespersons for the cause. The movie made a big impression on me, and I'd been in touch with the movement from that day forward, but I didn't know Ms. Baptist. When Alexis interviewed me and told me how Mary helped her find who she was over the years, I couldn't have been more deeply moved. To hear that hurting middle schooler say much the same thing about where she was right now, it was almost too much.

And plenty enough to remind me the real reasons why I write and why I wrote a book about Mary J. Blige. These testimonials sum up for me what music does best, often without even using words. It's certainly what's it's done for me. Like Woody Guthrie once said, I write to repay "the debt I owe." One of the most satisfying outcomes of both of these visits was that they became talks about how much we need each other.

That's appropriate. Blige arrived as a part of the largest women's movement in pop music history. She was immediately draped with the mantle, "Queen of Hip Hop Soul" and embraced the responsibility for the social movements that gave her that title. It's very unlikely Blige sees class consciousness as the key to the future that I do, but she never lets go of her connection to the working class sensibility of her audience. She trusts that connection, and she nurtures it. She takes pride in who she is, and she takes pride in her audience.

For all of those reasons, all of our conversations about Blige wind up being conversations about ourselves, individually and collectively. Though she generally keeps her music secular, this is one way her Pentecostal roots speak most loudly. The question stays on the table, what is our music calling us to do?

There's a kind of answer in that moment when the fingersnaps began to swell in Memphis. It was in the midst of talking about all of this pain, and I found those fingersnaps telling me to just lay it all out there. In a world where all the news is pain and violence and division, our music calls for us to find a way to love and a way to build unity. As the fingersnaps came, I fumbled for the words, but I know my main call was for all of those students to raise their voices in every way they can--the world needs to hear them more than ever.

The fingersnaps told me they were way ahead of me, and I was right where I needed to be. DA 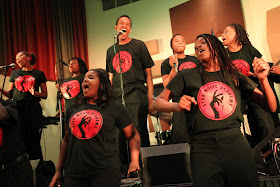 (Note: Thank you to the Guild Complex's Lisa Wagner for the first two pics, both from TheRAPy 101. I have no pictures from our Stax/Soulsville events, but I couldn't resist including a photo of the beautiful students who lend voice to the program.)